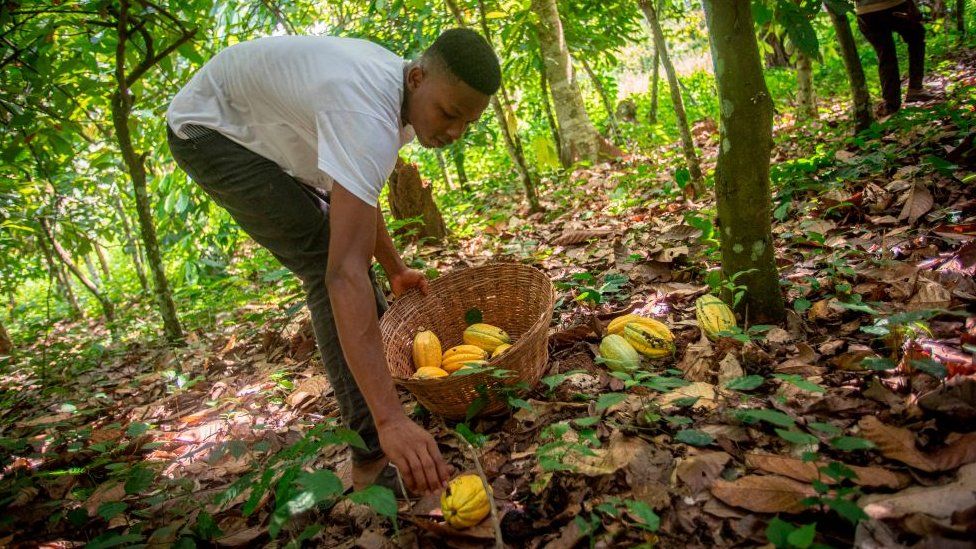 There is a lot of money in chocolate but the producers of the raw material see very little of it.

Last year the retail industry was worth $107bn (£78bn), according to one projection, but Ghana – the world’s second largest cocoa producer – earned just around $2bn.

This is a familiar pattern for many African countries where the economy is still shaped by a colonial relationship in which they export commodities to be processed elsewhere.

Ghana’s President, Nana Akufo-Addo, served notice on this last year when he told an audience in Switzerland that “there can be no future prosperity for the Ghanaian people” if this way of doing things continues.

The country currently processes about 30% of its cocoa crop, but despite plans for growing the domestic chocolate industry there are still many obstacles in the way.

Ambitious cocoa farmer Nana Aduna II – a traditional ruler, who inherited his 80-acre plantation two decades ago – is well aware of the difficulties.

He is among a number of Ghanaian entrepreneurs who are keen to seize the opportunity to process cocoa in Ghana itself, before exporting a more lucrative finished product.

But when it comes to the sweet stuff, Nana Aduna “decided not to go down the chocolate route”, he tells the BBC.

Instead he makes an income from offering tours where visitors can witness the fermentation process and observe how the cocoa pods are left outdoors to dry in the sun before they are processed into teas, wines and cacao nibs to be sold.

To make chocolate, on the other hand, would require Nana Aduna to import milk and sugar, which would drive up the cost of production.

He also says producing the confectionary requires consistent refrigeration, but the high cost of the equipment to achieve that is a major obstacle for entrepreneurs without substantial funds.

The farmer’s teas and wines are not typically associated with cocoa, but the goods are selling well, according to Nana Aduna, who says he can make 15 to 20 times more on these products than the raw beans.

Chocolate could have more of a mass market appeal and also offer good returns but for the moment, he says that’s not viable.

There are others with ambitions to set up a processing plant in Ghana but who are currently taking the cocoa beans overseas.

They include British-Ghanaian farm-owner and chocolate-maker Raphael Dapaah, who is based in London.

In 2016, he decided to add value to the cocoa that his family has been growing in Ghana for six decades by co-founding premium vegan brand Dapaah Chocolates.

He refines batches of chocolate in his London factory incorporating ingredients such as coconut milk powder and sea salt from Ghana’s Atlantic coast.

The former civil servant, who has global ambitions for his brand, says setting up production in the UK was a carefully considered strategy as it is closer to important markets.

“Once we’re able to establish a foothold in the UK and across Europe and North America, we would then relocate the bulk of our production to Ghana,” Mr Dapaah says.

Nevertheless, he acknowledges that infrastructure challenges in Ghana also influenced his decision to set up shop in the UK.

He highlights similar concerns to Nana Aduna about the business environment in Ghana.

He says he was worried about the inconsistent supply of energy in rural parts of Ghana and the large upfront capital expenditure required to buy equipment such as refrigerated lorries to transport the finished products to the port.

Access to funds is a big problem and Nana Aduna says that high interest rates on bank loans are an issue for fledgling businesses and at the moment he cannot afford to borrow money.

“You cannot grow a business when you have to service interest rates of 18-20% or even more,” he says.

But the government has pledged to address these structural issues.

Echoing the president’s words, Trade and Industry Minister Alan Kyerematen says that industrialisation is a major tenet of government policy.

“It only makes sense that the most important commodity in our country, which is cocoa… should become the target for a major programme of industrialisation,” he tells the BBC.

“If you look at all the most powerful nations globally they also happen to be the most industrialised economies.”

Ghana, however, is not known for its chocolate.

There are some local brands, like Golden Tree and artisanal label ’57 Chocolate, but President Akufo-Addo’s government still needs to do a lot of work to overcome production issues.

His One District One Factory programme aims to kickstart industrialisation by providing the infrastructure for agribusiness.

The establishment of processing plants in some of the big cocoa-growing areas is a key goal.

The fact that it has become easier for the private sector to invest in food processing is a welcome move, according to commodities expert Ekow Dontoh, who works for Bloomberg news.

He also highlights the big tax rebate available to processing companies that set up in the country’s free zones – designated areas to encourage economic activity – in a bid to help them export.

“There have been signs that there are prospects coming up that are exciting,” he says.

“All these are laudable ideas, [but] some of them still have teething problems. In principle we can say that there’s been some good steps, but the full impact is yet to be shown in the economy.”

Perhaps when the path is fully cleared, the likes of Nana Aduna and Mr Dapaah will become part of the country’s chocolate-exporting sector.

Mr Dapaah says this is his ambition, which developed once he realised the imbalance in earnings between cocoa producers like his family and Western chocolate manufacturers and brands.

“I thought it was about time our family took action to break that narrative… [and about] how I could return to Ghana and be of service to my family and the ambitions of the nation.” 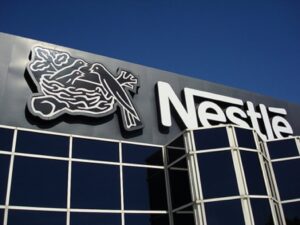